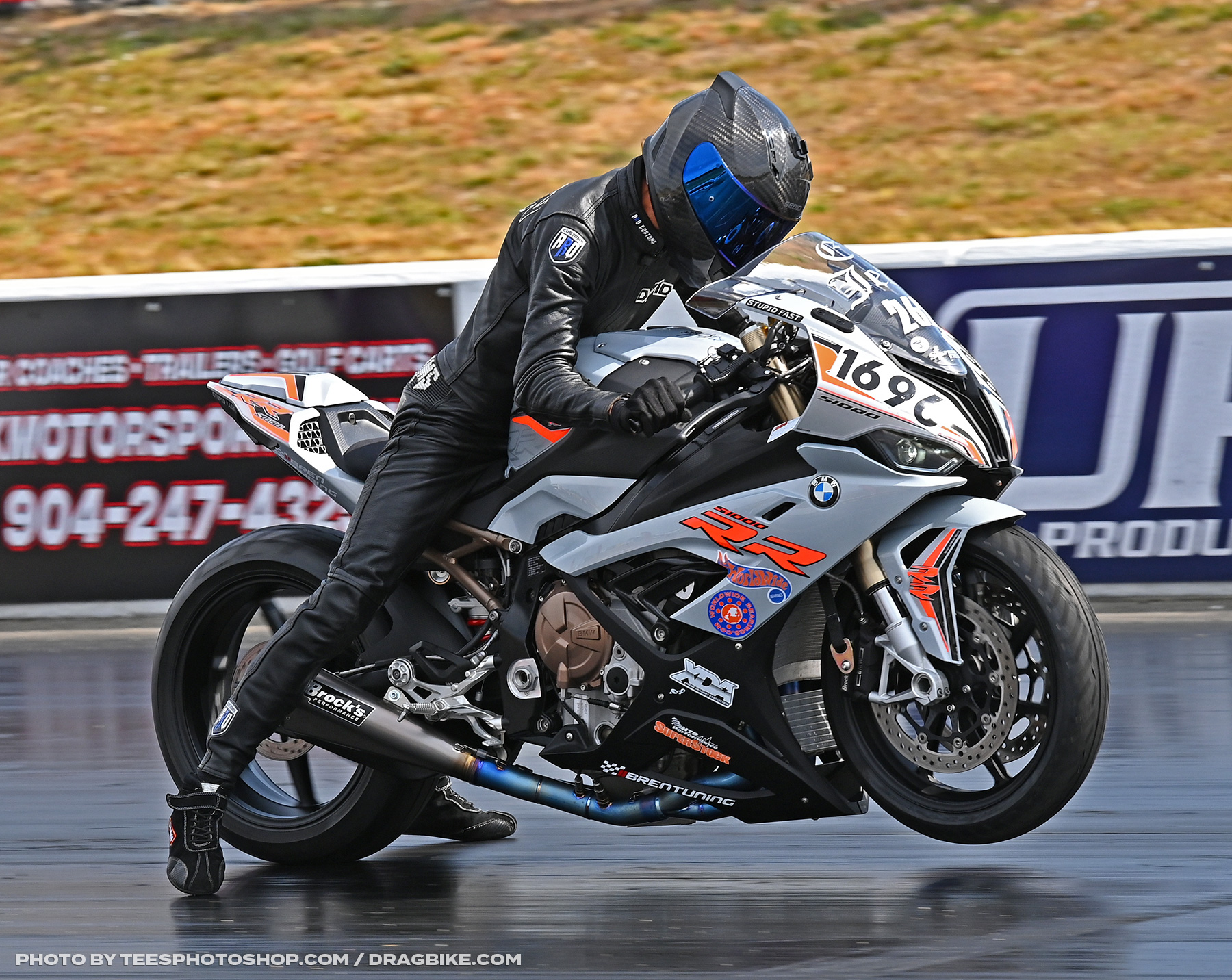 For two straight events, Zachary Applegate took the number one qualifying spot in HTP Performance Super Stock. Running only .012 off the class record of 8.66, Applegate led the twenty-five bike field with an 8.672.

Applegate would make it all the way to the semi-finals. A final round finish looked promising, but the semi-final is where the weekend would end for the young Dallas racer. Running off his number for the first time that weekend at 9.256, he gave the win to Jyrec Givens with a quicker 9.037.

Champion David Fondon was on a new ride for this event. He parked his ZX-10R and hopped on Tauncy Soprano’s 2020 BMW S1000RR tuned by Brock Davidson. This change of bikes once again shows that Super Stock is a rider’s class. Without missing a beat, David Fondon qualified with an 8.801 and ran an 8.8x pass every round.

In the final, he would face Jyrec Givens for one of the closest passes of the weekend. Fondon got the win running 8.850 to Givens’ 8.889, making this two in a row and giving his points lead a bigger gap. Watch this video of all his competition-round passes.

BMW S1000RR Tuning Before the Race

What happens when Brock follows the performance template he created during the ‘Stock 2 Brock’ Gixzilla Series…except on his buddy, Tauncey’s, ‘Brocked-Out’ 2020 BMW S1000RR with a BrenTuning Moto Stage 2 ECU Flash? SERIOUS #stupidfast is the ONLY way to describe the results!

Brock’s dyno reaches 200 MPH, says, “Oh, Hell No!” throws a warning screen up, and simply turns off as payment for such a dangerous, albeit accidental 200 MPH blast. Brock discusses the changes to the bike and even invites the elusive, Brendan Griffin, of BrenTuning Moto, himself to discuss the tremendous power gains the bike is recognizing now vs. when it was bone stock.

Then Brock does what naturally comes next… head straight to an XDA National Drag race event and puts a couple of the badasses in the class on the seat and has them pull the trigger.

The results even impressed the man himself by instantly creating not only the quickest and fastest S1000RR in the hotly contested XDA HTP Super Stock class but by also earning the title ‘Worlds Quickest Stock Wheelbase S1000RR in the process.

DME Racing Real Street saw their quickest qualified field with Spencer Claycomb taking the number one qualifying spot with a 7.456, only .007 off the class record.

In round one of eliminations, Claycomb would have problems off the line to send Richard Gadson to round two. David Stewart and Brittany Bohne would have the closest race of the session with Stewart getting the win with a 7.651 to Bohne’s 7.774. Brandon Teasley, Mark Hylton, Joey Gladstone, and Jeremy Teasley would also advance to round two.

David Stewart took the round two win but then was disqualified for adding illegal ballast to his forks in the form of an air scoop. This would advance champion Branson Teasley for another shot at a win. Mark Hylton won with a 7.608 over Jeremy Teasley’s 8.175. Joey Gladstone would also win with a 7.716 over Richard Gadson’s 7.834.

In the semi-final, Joey Gladstone earned a bye to the final. Brandon Teasley got the win over Mark Hylton with a 7.765 to his 8.007.

The final would be uneventful as Brandon Teasley would be a no-show with engine problems. Joey Gladstone took an easy win at 7.671. Teasley said he will be working to get the bike ready for the next event at Maryland International Raceway.

Forty-Eight racers in 1 Stop Speed 5.60 filled the lanes for a chance at the eight-mile title. Joe Desantis took the number one qualifying position with a dead-on 5.600 pass.

MTC Summer Nationals winner Dustin Lee took out Mark Blake, Ben Helland, Maegan Bowers, and Nick Noble on his way to another final round appearance. On the other side of the ladder Robert Parker made it to his first 5.60 final taking out Freddy Frazier, Simeon Amaru, David Poague, Jerome Hicks, and Jimmie Miller. 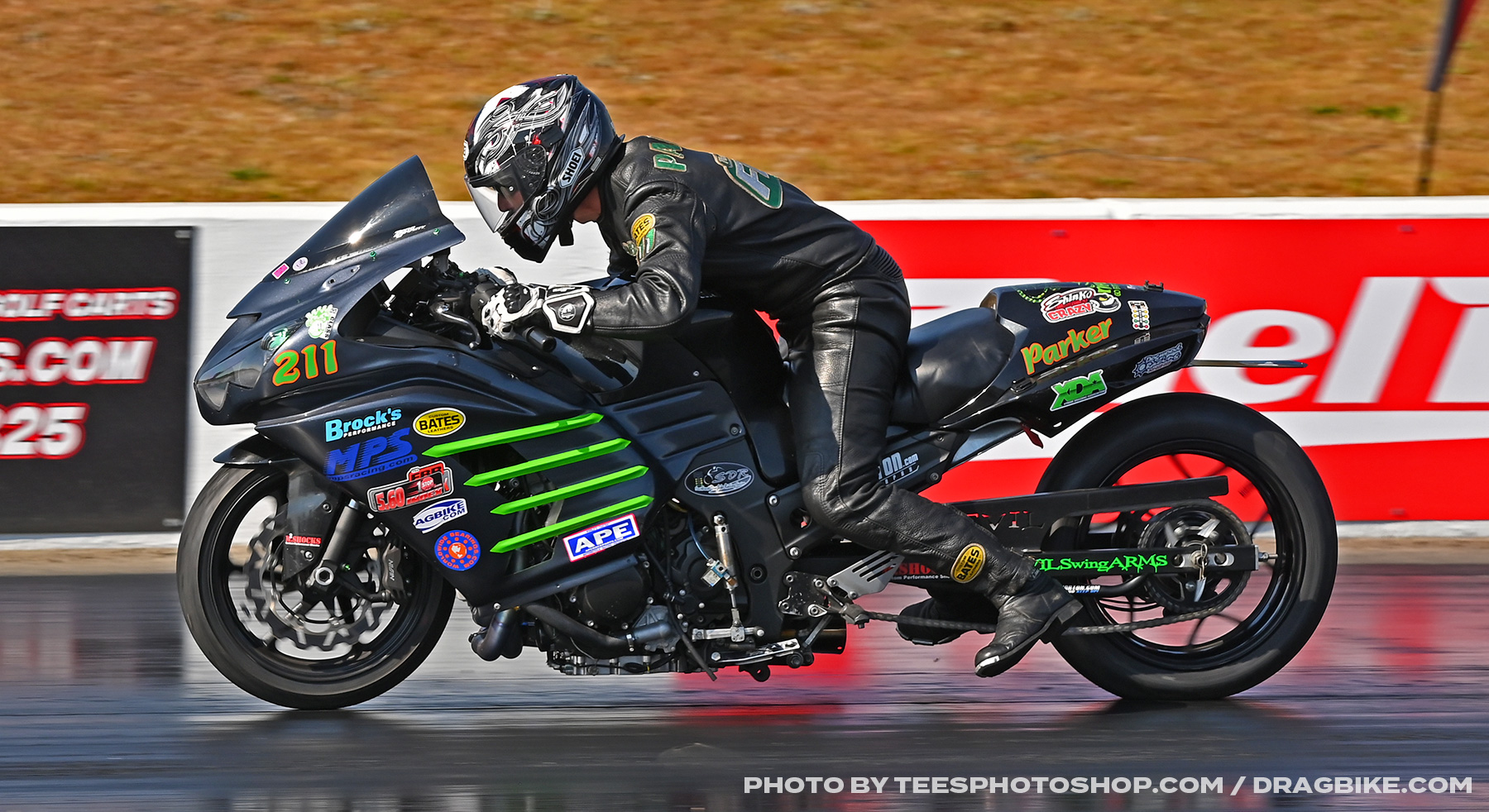 In the final Parker took the starting line advantage with a .041 to Lee’s .092 reaction time. Parker running 5.602 would get the win light with Lee’s 5.590 breakout pass. The win would be bittersweet for Parker as his fiancé Kenan Dorsey was not in attendance as she recovers from an on-track accident earlier this year. 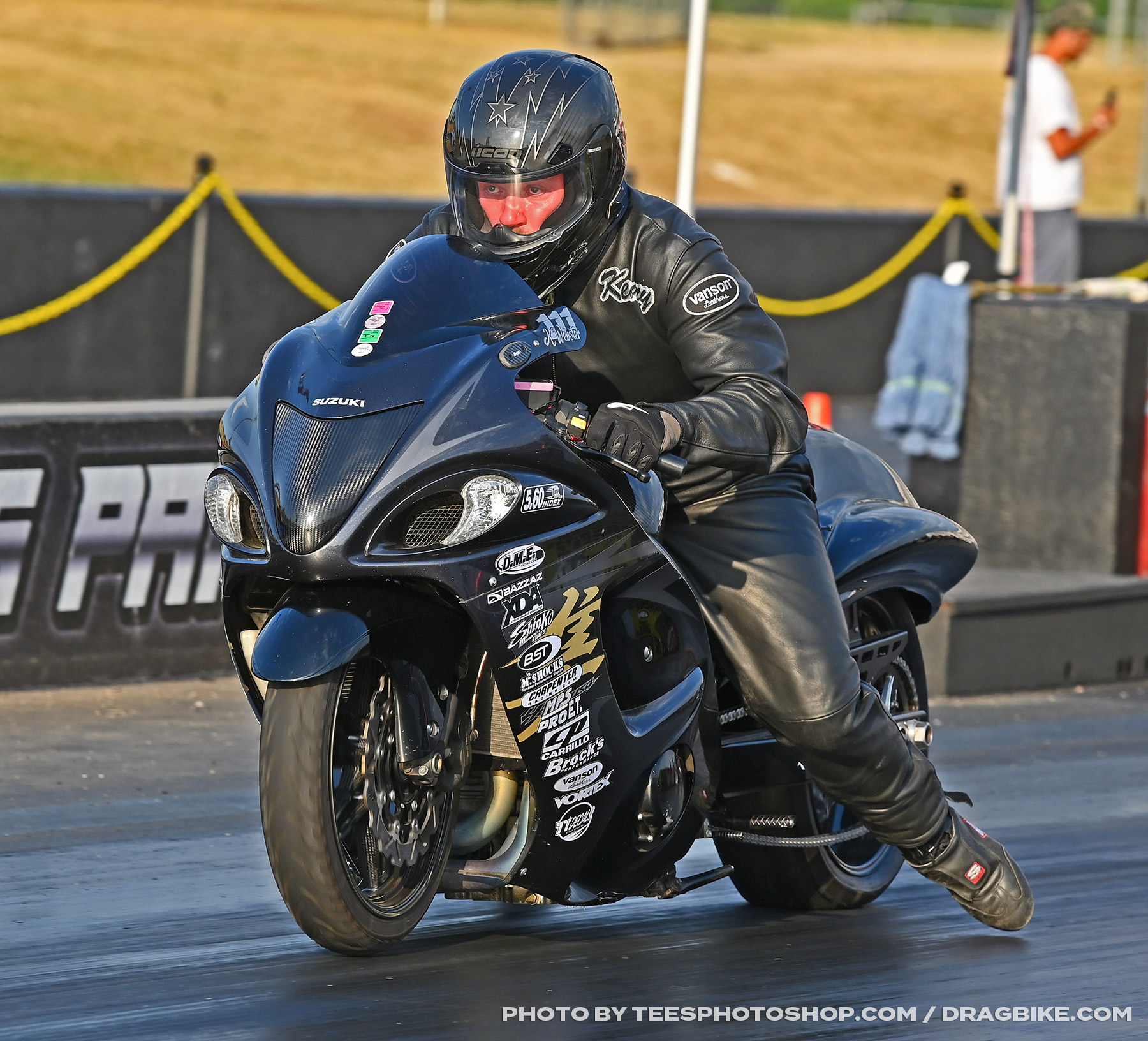 Close to one hundred and forty racers showed up to compete for the weekend’s $5,000 purse in MPS Racing Pro ET. Maryland racers Kenny Webster would face Pennsylvania racer Bill Maturo Jr in the final after they earned seven round wins. Both riders were killing the tree and running their dials consistently round after round. In the semi-final, Maturo cut a .009 light, however, he would go in the other direction and cut a -.009 red light to send Webster to the winner’s circle with the big payday.

In Brock’s Performance Street ET the competition was seeing red in the Virginia heat. The first round saw a whooping eighteen red lights as racers pushed the tree for that starting line advantage.

2020 class Champion Derrick Milbourne stayed green to win six rounds before making it to the final. Waiting for him in the final was Louis Green Jr. Milbourne dialed an 8.84 and Green a 9.07. Milbourne got the starting line advantage with a .014 reaction to Green’s .065. Green had problems out of the gate, and When Milbourne looked over, he lifted off the throttle to win with a 10.389 as Green rolled through the traps with a disappointing 23.107.

The Friday night Hard Times Parts and Service Gamblers race had thirty-two of the toughest sportsman racers on the property entered to start their weekend with a $2,000 win. Mike Schulz and Duane Jackson meet in the finals for the Friday Night battle. Schulz took the cash with ease when Jackson went -.036 red making the race to the finish irrelevant.

About the XDA – The Xtreme Dragbike Association (XDA) is an east coast motorcycle drag racing series with 700+ motorcycle racers competing at each event. Every XDA event hosts professional classes, sportsman classes, grudge racing, and a vendor midway. Lifestyle activities such as bike shows, bikini contests, DJ and live bands are also held at select events. For more information on the XDA, please visit XDAracing.com or connect with us on Facebook, Instagram, Twitter and YouTube.